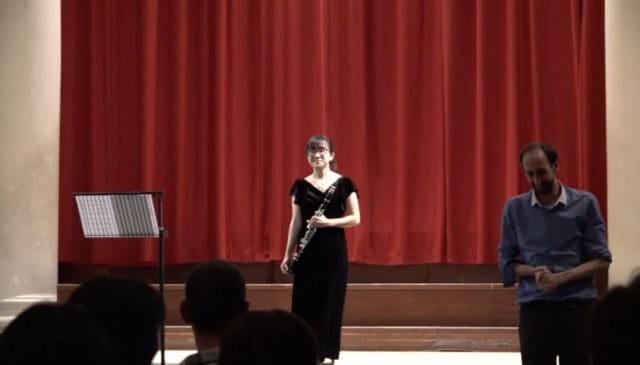 Every time it gets to this time of year I think back to spooky pieces I’ve come across, and the composer who immediately springs to mind is Richard Bullen.

A composer focusing on the space of a performance, Richard has written some truly atmospheric and powerful compositions where the building, or hall, is of equal importance as the composer and performer. I first encountered Richard’s music whilst studying at the Royal Academy of Music, and played Eb clarinet for ‘Garden of Forking Paths’. It was a bizarre sensation to play, walk, sometimes hear colleagues close and sometimes barely hear them, and imagine the final effect. It was incredibly fun though, and I felt like a squeaking bat in the balcony!

After this, I was one of eight clarinets in Richard’s large-ensemble piece, The House of Asteria, in LSO St Lukes. During the piece we went from the balcony, to the main hall, down to the crypt!

These experiences led me to commission two works from Richard, the first being ‘Hanamichi’ for clarinet, CD and large building. It was premiered in Tokyo as part of a recital called ‘B to C’, or Bach to contemporary. The organisers were quite bemused when I asked for the hall’s seating plans including corridors and backstage!

The second, connected work was one I commissioned while I was part of St John’s Smith Square’s Young Artists’ Scheme. Hikinuki begins after the final gong of Hanamichi, and both works are inspired by traditional Japanese Kabuki drama. I must say, trying to learn those 6 minutes of Hikinuki still haunts me: too many notes, too little time! To all the clarinettists out there: if you want to have a go, it’s published by the Composers Edition.

I recently caught up with Richard to see how he’s doing. As with the rest of us, this year has been challenging particularly for this realm of live performance. However there are plans for Richard to write his first organ piece as part of the Royal Academy of Music’s bicentenary celebrations, which is hugely exciting! As for staying sane, Richard’s remedy is to play a lot of Bach. Wonderful.